J. R. Boles is a fantasy and fiction writer currently hanging her hat with her husband in the Heartland, where they spend their free time chasing after their fearless daughter. She is a graduate of the University of Missouri-Kansas City and of the American University Washington College of Law. 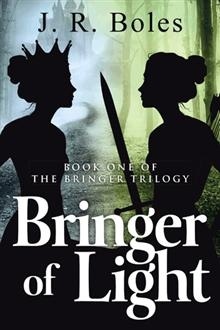 For generations, the kingdom of Arten has stood alone against the ancient dark mage Mercer, a man no longer bound by time. But when King Wern is kidnapped, Queen Arin will risk everything to get him back.

Lynden Trenadin is chosen to join the ranks of the elite Queen’s Champions both for her prowess as a warrior and her remarkable resemblance to the queen. She has spent her life battling at Arten’s borders, but now she must defend the queen with her life as they journey to their enemy’s castle. When the tide of battle goes against them, Lynden unleashes a magical power she didn’t know she possessed. Even though she saved hundreds of warriors, Lynden is forced to flee in shame for her use of forbidden magic.

Now on the run, Lynden must raise a rebellion to free her country from the tyranny of the enemy she thought she’d destroyed. A band of loyalists and an enclave of ancient mages aid her in her efforts, but with a dark mage bent on her destruction, Lynden must discover a way to harness her new magic before it is too late.