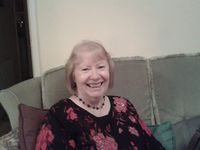 Yvonne was born in Swindon Wiltshire, the eldest of three children.
From a young age her greatest joy was to curl up with a good book. And over time she naturally progressed into writing.
At the age of ten, she ambitiously attempted her first novel but quickly gave up. However, the seed was planted, and in the coming years in between a successful singing career she continued to put pen to paper, writing poetry and short stories.
Yvonne and her husband Keith live in the UK, in the beautiful county of Warwickshire.

Irene, a gifted young artist, always paints with a mirror strategically positioned behind her, as an aid with perspective. As she puts the finishing touches to her latest painting, and studies its reflection in the mirror. She is shocked to see an extremely tall man, half hidden by the trees staring back at her.
Irene had not placed a figure in the painting. So who was he? Where did he come from?
When she examines the canvas, there is no one there!
Puzzled and a little apprehensive, Irene turns, and refocuses on the mirror. To her astonishment, the glass appears strangely liquid. She tentatively puts her hand out to touch it, and in a split second finds herself transported into the world of her own painting.
In this strange and frightening place, Irene meets the mysterious tall man, and embarks on a journey that will test every ounce of courage and faith she possesses.

In The Shadowed Valley, nothing is quite what it seems. What Celia faces here is worse than anything she experienced in the land of Dauthus. The evil residing in the valley messes with your mind.

Tom ran as fast as he could along the forest path, his leaden legs refusing to go any faster. He was sure the kidnappers were after him, but he dare not stop and look back. Frantic with worry he put his hand inside his jacket pocket and felt for Mask, but the pocket was empty. In despair he shouted her name. It was always the same dream and each time he awoke at the same point, gasping for breath and calling for her.