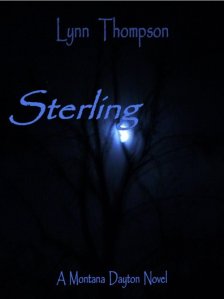 “Gotcha,” Jamie snapped, yanking the kid out of the bushes by her house. “I saw you yesterday hanging around and now today. What are you doing on my property?”

The filthy kid didn’t comment as Jamie hauled her into the shop. The only reason Jamie could tell she was a female was because of her perky body.

Jamie showed her to the bathroom.

“Clean up while I put the closed sign out and lock the door.”

As much as Jamie wanted to hope this kid was the one who stole the pendant, Jamie’s gut told her she hadn’t.

The kid would have pawned it by now and holed up in a motel, unless the kid wanted cash for its safe return, but Jamie didn’t think so. Maybe she would get lucky and the kid had been hanging around when it was stolen, and be able to give her information on the burglar.

The first thing she needed to do was get the kid to talk. The best way to accomplish that would be filling up her stomach and giving her a bed to sleep in.

She walked back to the bathroom where the kid was sitting on the toilet timid as a mouse.

“Come on.” Jamie said. “I’m starving let’s get something to eat.”

The kid followed Jamie into the kitchen and sat down in a chair while Jamie poked her head into the refrigerator.

“What do you want? I have water, coke, OJ.” She glanced at the kid. “I also have coffee and tea.”

She didn’t move or take her eyes off Jamie, so Jamie reached into the fridge and pulled out a coke. She sat it down in front of the kid, started some coffee for herself then took out the makings for some sandwiches. Once the sandwiches were made she sat down across from the kid and ate.

“Can you talk?” Jamie asked while she silently examined her.

The kid had shoulder length dirty blond hair or blond hair, she couldn’t tell at the moment because her hair hadn’t been washed lately. She was way too thin in her torn up baggy jeans and dirty yellow tee shirt. Her clothes and tennis shoes definitely needed to be deposited in the nearest trash can.

She appeared to be in her teenage years, somewhere between 13 and 16, it was hard to tell. The kid really needed a shower.

The only thing that stood out on her was her deep blue sapphire eyes. For as grungy as she was her eyes were clear and focused.

The kid nodded yes, but still didn’t say anything.

“Okay.” Jamie said taking the empty plates to the sink. “I’ve got some clothes in my shop I’ll give you, but only if you take a shower and give me your old clothes.”

The kid nodded yes again and followed Jamie into her shop.

“I hope you don’t mind a skirt.” Jamie said, picking one that should fit the kid along with a tunic.

“You can find some sandals when you come back down. If you’re here long enough I’ll take you shopping.”

“There was a kid hanging around my place yesterday after you left, and again today. She’s upstairs taking a shower now; she could be a potential witness.”

“Has she said anything to you? Do you have a name?”

She sighed. “No, she hasn’t said a word. I thought you might want to come by and talk to her.”

“I would, but not yet. See if you can get her to talk to you, or at least get me her name and I’ll run a background check before I come over. I don’t want her to feel intimidated and run.”

He also didn’t want to stop at this point; it would make him late for his date with Montana. He knew she wouldn’t care, but he did.

Jamie disconnected the call before heading back up the stairs to make sure the extra bedroom was made up for the kid.

“I’m in here.” Jamie replied. The kid did have a voice.

When the kid–teenager, stepped into the bedroom Jamie was speechless. The teen had to be at least 16 years old. She had sleek, golden blond, shoulder length hair that made her eyes look even bluer, if that was possible. She was still too skinny, but she would grow up to be a beautiful young lady.

“Come sit on the bed.” Jamie patted the space beside her.

“You don’t have to do this.” The teen whispered softly, sitting next to Jamie. “I didn’t mean to bother you; I was just drawn to this place for some reason.”

“You’re no bother. What is your name?”

“Samantha. Samantha Sungold. I’m still trying to decide if I want to be called Sam, Sun or Gold.”

“What did your parents call you?”

Samantha’s eyes grew hard. “I don’t have any parents.” She bit out.

Jamie flinched, but stayed calm from the retort and kept her voice even. “I overstepped my boundaries. My name is Jamie.”

She would have to tread lightly where Samantha was concerned. “Why don’t I call you Sam for now? You can let me know if you change your mind and want to be called something else. Okay?”

“Okay, but Iprobably won’t be staying long. You know, people to meet, places to go.”

“Well while you’re here you can stay in this room.”

Samantha stood up and inspected the room. She opened the closet door, pulled out all the drawers in the dresser, checked under the bed, and turned on all the light switches while Jamie sat there watching.

“Does it meet your approval?”

She shrugged her shoulders. “Is the guest bathroom mine too?”

“I guess I could stay for the night.”

“It’s a deal.” Jamie held out her hand for a handshake.

Sam took her hand and shook it.

“I’ll be downstairs if you need anything.”

Jamie quickly shot a text to Max with Samantha’s name on her cell phone as she wandered back downstairs, hopefully he would get a hit on it and be able to give her some information about the girl.

She thought about Samantha upstairs, she didn’t think the girl would steal anything, and she was kind of hoping Sam would stick around for a while. She sensed that Sam was a kindred spirit, even if Sam didn’t know it yet.

Jamie was busy making chocolate chip cookies when Sam decided to join her. She opened the fridge, pulling out a coke before sitting on the counter top and sticking her finger in the cookie dough.

“I hope you’ve washed your hands?” Jamie stated as she started scooping the dough into balls.

Jamie wasn’t sure what to say to Sam and didn’t want to offend her again, so she kept her mouth shut and worked on the cookies in hopes that Sam would start a conversation. Jamie stuck the cookie dough in the fridge, poured a cup of coffee, and sat down at the table with Sam following behind her.

She could feel Sam sizing her up as they sat in silence.

“Can I check out your book selection?” Sam asked.

“Go ahead. I’ll put the cookies in the oven.”